Truth is, most old recipes were not much more than shopping lists with cursory prep notes. Detailed instructions were not considered necessary because it was understood that whoever cooked the food already knew the basics. Measurements are time/country/food specific.

Did you know some culinary historians say we Americans measure with objects(as opposed to weight) because of our pioneer heritage? Conestoga wagons had plenty of cups & spoons but very few reliable scales. Scientific oven temperatures and exact measurements had no place in pre-industrial kitchens...which explains why food was commonly *served forth* when it was *done.*

Standard measurements and detailed cooking instructions were a by-product of the Industrial Revolution and are commonly attributed to Fannie M. Farmer, principal of the Boston Cooking School."

"Correct measurements are absolutely necessary to insure the best results.
Good judgment, with experience, has taught some to measure by sight;

but the majority need definite guides."

Tin, granite-ware, and glass measuring-cups, divided in quarters or thirds, holding one half-pint, and tea and table spoons of regulation sizes,—which may be bought at any store where kitchen furnishings are sold,—and a ease knife, are essentials for correct measurement. Mixing-spoons, which are little larger than tablespoons, should not be con-founded with the latter.

Firmly packed: With a spatula, a spoon, or by hand, the ingredient is pressed as tightly as possible into the measuring device.

Lightly packed: The ingredient is pressed lightly into the measuring device, only tightly enough to ensure no air pockets.

Even / level: A precise measure of an ingredient, discarding all of the ingredient that rises above the rim of the measuring device. Sweeping across the top of the measure with the back of a straight knife or the blade of a spatula is a common leveling method.

Rounded: Allowing a measure of an ingredient to pile up above the rim of the measuring device naturally, into a soft, rounded shape.

Heaping / heaped: The maximum amount of an ingredient which will stay on the measuring device.

To measure tea or table spoonfuls, dip the spoon in the ingredient, fill, lift, and level with a knife, the sharp edge of knife being toward tip of spoon. Divide with knife lengthwise of spoon, for a half-spoonful; divide halves crosswise for quarters, and quarters crosswise for eighths. Less than one-eighth of a teaspoonful is considered a few grains.

A cupful of liquid is all the cup will hold.

A tea or table spoonful is all the spoon will hold.

Measuring Butter, Lard, etc. To measure butter, lard, and other solid fats, pack solidly into cup or spoon, and level with a knife.

When dry ingredients, liquids, and fats are called for in the same recipe, measure in the order given, thereby using but one cup." 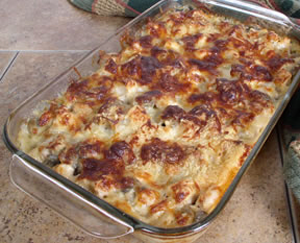 "Turkey is one of the most versatile meats to use up as leftovers. Besides making a great sandwich or soup, try a casserole or a cold salad. Using spices and sauces to reinvent your turkey can be fun. Here are a couple of recipes for your leftover turkey."


Note:
For per order assembly; noodles, sauce and fried mushrooms can be made ahead and kept warm. Layer ingredients, using 6 oz of turkey per order in individual dishes.  Microwave for 3 minutes and finish in the oven until hot & bubbling about 6-8 minutes. Serve with garlic bread and garden salad to start.