Is the glass half full or half empty?

The debate rages on. What's your opinion?

The optimist says the glass is half full. 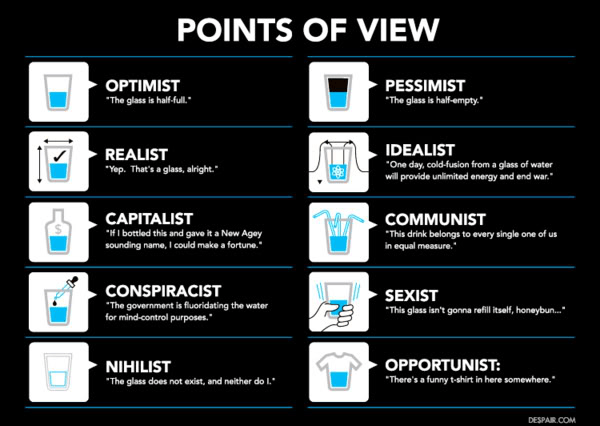 The pessimist says the glass is half empty.

The project manager says the glass is twice as big as it needs to be.

The realist says the glass contains half the required amount of liquid for it to overflow.

And the cynic... wonders who drank the other half.

The school teacher says it's not about whether the glass is half empty or half full, it's whether there is something in the glass at all.

Anyway... Attitude is not about whether the glass is half full or half empty, it's about who is paying for the next round.

The professional trainer does not care if the glass is half full or half empty, he just knows that starting the discussion will give him ten minutes to figure out why his powerpoint presentation is not working.

The ground-down mother of a persistently demanding five-year-old says sweetheart it's whatever you want it to be, just please let mummy have five minutes peace and quiet.

The consultant says let's examine the question, prepare a strategy for an answer, and all for a daily rate of...

The inquisitive troublemaker wants to know what's in the glass anyhow... and wants the rest of it.

The homebuilder sees the dirty glass, washes and dries it, then puts it away in a custom oak and etched glass cabinet that he built himself using only hand tools.

The worrier frets that the remaining half will evaporate by next morning. 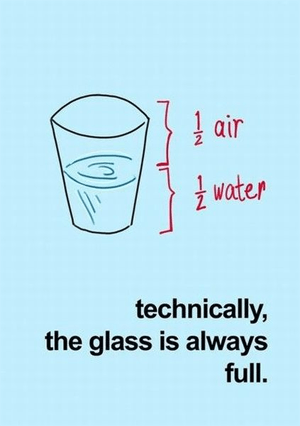 The fanatic thinks the glass is completely full, even though it isn't.

The entrepreneur sees the glass as undervalued by half its potential.

The computer specialist says that next year the glass capacity will double, be half the price, but cost you 50% more for me to give you the answer.

The first engineer says the glass is over-designed for the quantity of water.

The second engineer says (when the half is tainted) he's glad he put the other half in a redundant glass. (Based on a Dilbert cartoon by Scott Adams)

The computer programmer says the glass is full-empty.

The logician says that where the glass is in process of being filled then it is half full; where it is in the process of being emptied then it is half empty; and where its status in terms of being filled or emptied is unknown then the glass is one in which a boundary between liquid and gas lies exactly midway between the inside bottom and the upper rim, assuming that the glass has parallel sides and rests on a level surface, and where it does not then the liquid/gas boundary lies exactly midway between the upper and lower equal halves of the available total volume of said glass.

The scientist says a guess based on a visual cue is inaccurate, so mark the glass at the bottom of the meniscus of the content, pour the content into a bigger glass; fill the empty glass with fresh content up to the mark; add the original content back in; if the combined content overflows the lip, the glass was more than half full; if it doesn't reach the top, the glass was more than half empty; if it neither overflows nor fails to reach the top then it was either half-full or half-empty. Now what was the question again?

The personal coach knows that the glass goes from full to empty depending on the circumstances, and reminds the drinker that he can always fill the glass when he wishes.

The grammarian says that while the terms half-full and half-empty are colloquially acceptable the glass can technically be neither since both full and empty are absolute states and therefore are incapable of being halved or modified in any way.

The auditor first checks whether the empty half is material and then designs the audit procedures to obtain sufficient evidence to conclude that the glass is indeed empty.

The waiter will hurry to replace the glass with a full one. For him there are no doubts: the glass was empty when he took it away; it is full in the bill that he brings you.

The magician will show you the glass with the full half at the top. 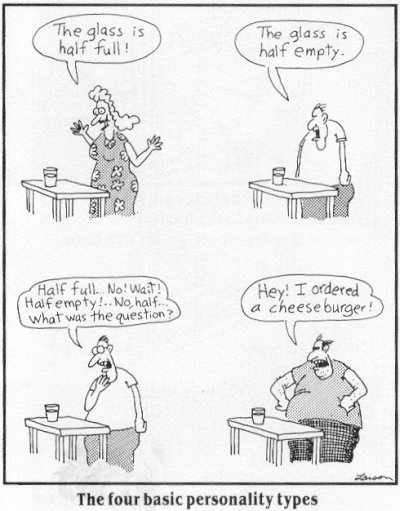 The musician says he/she is unimpressed with the promoter of the concert for not providing more alcohol.

The dog just wonders: can he eat the glass or will you throw it so he can bring it back... The cat wonders why the glass is only half full (or empty)... is it a trick... poison perhaps...

The eternally optimistic eccentric would say, the glass is consistently overflowing (or is that the neurotic?...)

The person who is no longer trapped in The Matrix (whatever one might call him/her) says: "There is no glass..."

The adolescent student says the glass is just another dirty trick played by the teacher to prove that students are dumb.

The research scientist says that following initial observation and testing a working hypothesis for further research is: "The glass is both half full and half empty," and that these findings warrant further investigation with a more representative sample of glasses and contents, which may or may not be liquid.

The algebraic simultaneous equation theorist says that if the glass is equally half full and half empty, then half full = half empty; therefore ½ x F = ½ x E; therefore (by multiplying both sides of the equation by 2) we show that F = E; i.e. Full equals Empty!

The efficiency analyst says the glass is operating substantially below optimization level, being consistently exactly 50% under-utilized during the period of assessment, corresponding to an over-resourcing in meeting demand equating to precisely 200% of requisite capacity in volume terms, not accounting for seasonal trends and shrinkage, and that if the situation continues there is in theory opportunity for savings or expansion.

The 'perfect' 1950s housewife would not leave the glass sitting there long enough for anyone to consider the question, but would scoop it up, wash it up, dry it to a gleaming shine and put it back in the glass cabinet in a jiffy. No half-full or half-empty in her world... just a full glass or an untidy one.

The phobic says yuck, someone drank out of it and left their germs on the glass.

The psychiatrist would ask you, "Is the half-empty/half-full glass really that important? I mean... really? Think about it. If fact, let's not. Let's set that particular issue aside for a few moments and talk about what's really bothering you.."

The sales person will convince you that even though the glass is half full/empty you are getting more than your money's worth compared to buying a full glass. The full glass is less expensive because of the economies of producing a common standard version in big quantities, whereas the more expensive half full/empty glass represents much better value because it is more exclusive and better quality, and very hard to come by and greatly sought after.

The co-dependent hurries to fill your glass, but not so completely that you would spill it and get upset. Because when you get upset...

The (suggestions welcome for this one) says that's not my glass, mine was bigger.

The radical thankful child of Jesus says, "THE CUP RUNNETH OVER.."

The Taoist sees that the glass is both half empty and half full, that neither half could exist without the other, requiring a point of balance in order to maintain equilibrium in the universe, and therefore, are merely two mirror images of the same realistic concept, so in the purity of absolute truth the glass is neither half full or half empty, the glass simply IS...

The government would say that the glass is fuller than it would be if the opposition party were in power.

The opposition would say that it is irrelevant because the present administration has changed the way such volume statistics are collected.

The cynic wonders who drank the other half.

The worrier frets that the remaining half will evaporate by next morning.

The hostess would say that the glass is half empty, but the guest would say it's half full.

The husband would say to his wife, "Are you going to drink the rest of that?"

The philosopher would say that, if the glass were in the forest and no one was there to see it, would it be half anything?

The economist would say that, in real terms, the glass is 25% fuller than at the same time last year.

The banker would say that the glass has just under 50% of its net worth in liquid assets.

The entrepreneur would say the glass as undervalued by half its potential.

The psychiatrist would ask, "What did your mother say about the glass?"

The engineer would say that the glass is twice the size it needs to be. 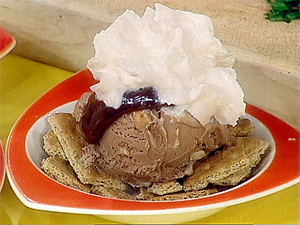