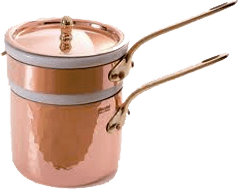 Bain-marie
A roasting pan or baking dish partially filled with water to allow food to cook more slowly and be protected from direct high heat. Used for custards and terrines.

Bavarois
Creamy pudding that is made with cream and eggs, then set with gelatin.

Beignets
Fritters. Small dollops of dough that are fried.

Beurre Manié
Butter and flour mixed together in equal parts and used to thicken liquids.

Beurre Noisette
Browned butter.
Bisque
A shellfish soup that has been thickened.
Blanquette 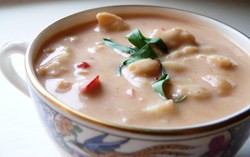 A stew made from meat that has not been browned or fried. Usually refers to stews made of lamb, chicken or veal.

Bouquet Garni
A mixture of fresh herbs tied together with string and used to flavor stews, soups etc. It refers to a mix of parsley, bay leaf, thyme (and sometimes celery stalk). The bouquet is removed before serving.

Vegetables cut into very small diced pieces.
Canapé
An appetizer consisting of a small bread or biscuit base covered with a flavored topping.

Chapelux
Browned bread crumbs.
Chine
To remove the backbone from a rack of ribs.
Concasser
To chop roughly
Consommé
Broth that has been made clear.
Coulis
A thick sauce usually made from one main ingredient, such as raspberry coulis.
Court Bouillon
Flavored liquid used for cooking fish.
Crêpes 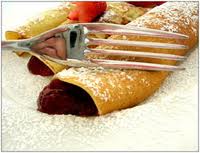 Very thin pancakes.Croquettes
A mixture of potato with ground cooked meat, fish or poultry formed into balls, patties or other shapes and coated with a breading before frying.
Croustade
Bread piece dipped in butter and baked until it is crisp.

Croûtons
Small cubes of bread used as a garnish is salads and soups.
Dariole
Small mold shaped like a castle used for molding salads or baking cakes.

Déglacer
To deglaze, to loosen browned juices and fat from the bottom of a frying pan or saucepan by adding liquid, bringing to a boil and stirring. The liquid is usually water, wine or broth.

Dégorger
To extract juices from meat, fish or vegetables, usually by salting them, then soaking or washing. It is usually done to remove a strong taste.

Dépouiller
To skim off the scum that accumulates at the top of a stock or sauce.

Entrecôte
Sirloin steak.
Entrée
The term used to refer to something served before the main course but is used now to refer to the actual main course.
Entremets
Dessert or sweet, but not including pastries.

Escalops
A thin slice of meat that is often pounded out to make it thinner.
Farce
Stuffing. 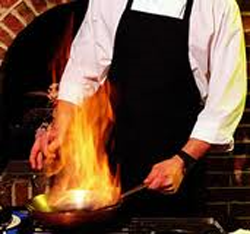 To set alcohol on fire.
Frappé
Something that is iced or set on or in a bed of ice.
Fricassé
A stew made from poultry, meat or rabbit that has a white sauce.
Glace de Viande
Reduced brown stock used to add color and flavor to sauces.
Gratiner or Au Gratin
To sprinkle the surface of a cooked food with bread crumbs and butter, and sometimes cheese and brown under the broiler. The finished food is referred to as au gratin as in au gratin potatoes.
Hors d'Oeuvres
First course or appetizer.
Jus or Jus de Viande
The juices that occur naturally from cooking.
Jus Lié
A thickened gravy.
Liaison
Ingredients used for thickening sauces, soups or other liquids.
Macédoine
Small diced mixed vegetables, usually containing at least one root vegetable. Sometimes also means a mixture of fruit, like fruit salad.
Marmite
French word for a covered earthenware container for soup. The soup is both cooked and served in it.
Mirepoix 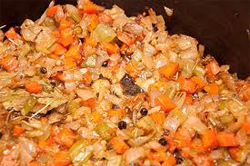 A mixture of braising vegetables.
Mortifier
To hand meat, game or poultry.

Moulè-â-manqué
A cake tin that is wider at the base than at the top and only about 1" in depth.
Napper
To coat, mask or cover with something.

Noisette
The word literally means "nut". It usually means nut brown in color. For example, beurre noisette is butter browned over heat until it becomes a nut brown color. It can also refer to boneless rack of lamb that is rolled, tied and cut into rounds. The word can also refer to hazelnuts.
Nouvelle Cuisine
A term that refers to the style of cooking that features lighter dishes with lighter sauces and very fresh ingredients.
Panade
A very thick mixture, usually made from a combination of flour, butter and milk, that is used as a base for dishes such as soufflés and fish cakes.
Paner
To coat with egg and crumbs before frying.Papillote 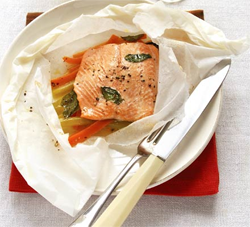 A wrapping of parchment paper around fish or meat used for cooking. The paper retains moisture in the food.
Parisienne
Refers to potatoes molded into balls with a melon scoop and fried or roasted.
Pâte
A basic mixture or paste. Often refers to uncooked dough or pastry.
Pâté
A paste made of liver, pork or game.
76200
A sweet or pastry, it also refers to a cake shop.
Piquer
To insert fat, bacon, ham etc into meat or poultry.
Poussin
A young chicken.Quenelle
Minced fish or meat mixture that is formed into small shapes and poached. It also refers to a shape that the minced mixture is made into.
Ragoût
A stew
Réchauffée
Reheated food.

Repere
Flour mixed with water or egg white and used to seal pans when cooking food slowly. Often used when cooking a ragoût.

Revenir
To quickly fry meats or vegetables in hot fat to warm them through.
Roux

Melted butter to which flour has been added. Used as a thickener for sauces or soups.

Sautoir
A deep frying pan with a lid, used for recipes that require fast frying, then slow cooking.
Terrine
Pâté or mixture of minced ingredients, baked or steamed in a loaf shaped container.

Timbale
A dish cooked in a mold that is higher than it is wide and has sloping sides.
Velouté
A type of sauce made from butter, flour, cream and stock.
Vol-au-vent 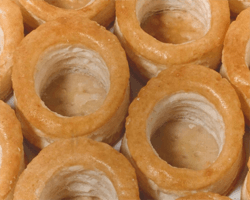 A large pastry case made of puff pastry that is usually used as a container for creamed dishes, such as creamed chicken.

Sorry for the inconvenience!

Before we can place items in your shopping cart,

Please fill out the customer info form if you want to proceed with your order, otherwise feel free to continue browsing!